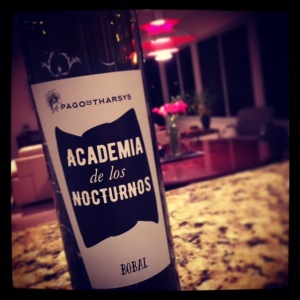 Spring is in the air and with it the luck of new wine discoveries. Some of which I hope to be writing about in the near future. First up is my latest Spanish find the grape varietal Bobal: thanks to Pago De Tharsys Academia de los Nocturnos, From the DO Utiel-Requena area of Valencia.

Third most planted grape in Spain? Have I been living under a wine glass? Always so much to learn, discover and of course share. Not knowing any of this history I fell for the fruity embodiment of what could be a big hit for my customer base at Whole Foods.

Light bodied, good acidity, light to no discernible tannins, red fruits noted, nice flavor richness at the back-end of palate, not fruit forward yet somewhat complex as in no one flavor jumps out, herbal/floral/spices [violet, cedar] appear on the palate after breathing 30 minutes.

I would describe this wine to be comparable to old world affordable Pinot Noir, Ventoux, and Beaujolais. An easy drinker and excellent choice for everyday drinking, as a party wine when trying to satisfy a crowd, a light Summer red (specially in Miami!), and holiday meals like Thanksgiving when you have many different styles of foods you are pairing with.  We happened to pair it with a Whole Foods Cowboy Burger, potato salad, fresh sliced tomatoes and a cucumber dill salad. This Bobal paired well with them all.

I am happy to report that three weeks after stacking the Academia de los Nocturnes in our North Miami wine department it has been discovered. Could be the cool minimal label, the newness factor, or did I mention the price? A whopping $8.99! Not even on sale, regularly priced. Yes, many factors to consider but I think the repeat customer business is all the proof we will need. To new discoveries!  ¡SALUD! 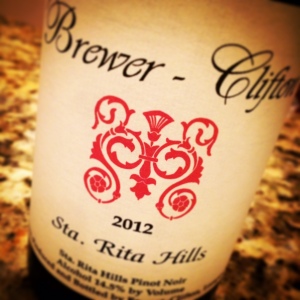 It seems I picked the perfect winter night, for Miami that is, to pop open the cork on this beautiful wine. Picture it; a day off, a clear night, temperature in the upper 50’s maybe breaking 60, windows open, outdoor fire pit roaring and the smell of roasting chicken flowing through the house.

I had been biting at the bit to try this wine ever since the Wine Spectator Top 10 wine list was released and I discovered we had this particular vintage on the shelves at Whole Foods. Let’s just say we didn’t have it for long.  Before I knew it our stock was depleted but luckily not before I had set aside a bottle or two for myself.

The one drawback to this perfect setting was the fact that I was drinking alone. I do not recall the exact circumstances but my better half would be arriving later and our beloved Miss Jane the American Bulldog didn’t count. Upon serving my first pour, taking in the multitude of aromas and taking my first sip I got the urge to start inviting others over! This had to be shared, I couldn’t be selfish. My mad texting was to no avail, my nearby wine loving crew were all unfortunately predisposed. Go figure, dinner time on a weeknight.  We’ve always joked about “drinking and dialing” but in this case the drinking hadn’t really started!

My wine tasting brought about another interesting reaction. As I reviewed my notes, at the top of the list: “wanted to drink immediately!”. Now I can’t say I haven’t felt that way before but it doesn’t happen all that often and I can’t believe I actually wrote it down.

Palate: Fruit forward perfection, with spice at the back end,  smooth up front with alcohol kick at the end [needs to open or age to soften], perfumy; lavender, licorice.

I can see why this wine is receiving the accolades that it has. As per the tasting notes provided by Brewer – Clifton the grapes for this wine are 100% Pinot Noir and come from two of their estate vineyards: 3-D and Machado.  For more information on the winery or winemakers check out Prince of Pinot Pinofile or the Brewer Clifton website.

I say, if you can find this wine BUY IT. It is an incredible value at under $40.00 and should age beautifully should you have the patience for that kind of thing. Me and my second bottle? I will be popping that cork as soon as my wine loving friends can fit me into their busy schedules. I guess more importantly when I can fit them into mine because I will be bringing the wine!  ¡SALUD!

92 Points. The 2012 Pinot Noir Sta. Rita Hills is a beautiful effort that has a tinge of Burgundian flair in its forest floor, licorice and black cherry driven personality. Medium-bodied, rounded, supple and with serious focus and cut, it’s a great value to enjoy over the coming 5-7 years. 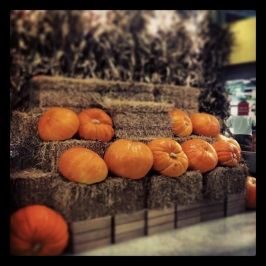 As this years Pumpkin displays turn to harvest motifs with cider, our in-store Halloween candy has changed over to chocolate turkeys and candy canes.

Celebrations are in the air and I have come to realize that the end of the year will soon be upon us.  Of course celebrating with libations shouldn’t only occur once or twice a year. I like to think I celebrate it all whether they be small accomplishments or BIG holidays. 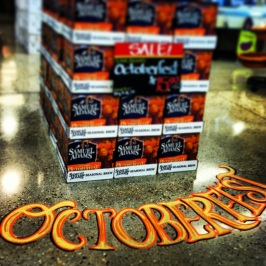 For example just last week Whine and Cheers for Wine passed the 20,000+ visitor mark. This week the well-known California winemaker Michael Martini was nice enough to contact me after being directed to my review of his Louis M. Martini Napa Cabernet.  Yes it’s been a good few weeks and all good reasons to celebrate. 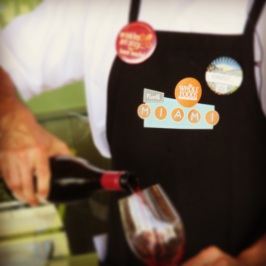 As I went back and reviewed last years holiday post, HARK! The Holidays Approacheth!! I came to realize how much has changed. 2012: I was a Wine Steward spreading my time between a grocery store wine department and their liquor store. 2013: I became a Wine Buyer or better yet a Specialty Beverage Buyer for Whole Foods Market. Regularly teaching classes and planning wine events. I’ve had opportunities to meet wine makers face to face and the good fortune to have my writings shared by wine companies and news agencies on their social media sites.  Yes it’s been a good couple of years; all good reasons to celebrate. 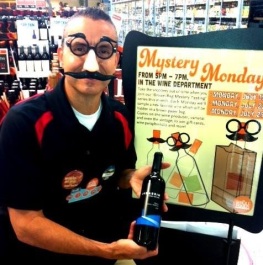 This year I’ve decided to let “the people” pick our top 10 wines for 2013 and the holiday season.  These are the wines that have garnered the most visits and searches at Whine and Cheers. We already know how I feel about these wines. Now you’ll know the wines the public is researching, buying and hopefully celebrating with. 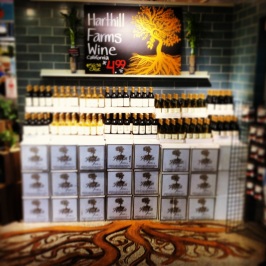 Here you go in no particular order. The Whine and Cheers For Wine Top 10 of 2013 picked by the general wine public. I’ve averaged the top vote getters for the month, quarter and year. Giving a chance to recent reviews that have not had time to garner as many visits as a review posted 9 months ago.   Drum-roll please!!!

Kirkland Signature Bordeaux:  I guess there is something to be said about Costco wine…..

Winking Owl Vineyards Shiraz: something to be said about Aldi and Trader Joe wines?

A baker’s dozen or runners-up would add these to the list: 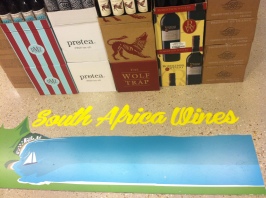 I am glad to see many countries represented on our list; Chile, Argentina, South Africa, USA, France, Australia and Germany!

Speaking of countries, these stats always amaze me, below are the TOP 12 traveling over to this here site for wine information, minus my own USA: 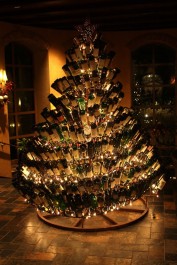 Day and New Years Eve around the corner, I wish and hope, that we not only are able to celebrate these obvious big events in our lives but also appreciate and recognize the day-to-day happenings. Events also meant to be shared and noted. All good reasons to celebrate! 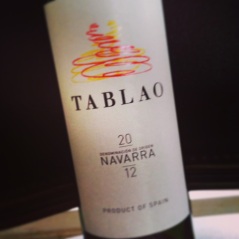 The first fact that caught my eye was the “Denominacion de Origen” of Navarra Spain. A region I quite honestly never heard of before, but quickly learned is located near the France border of northern Spain. From the Wines of Navarra web-site:

Navarra is the name of both the autonomous region in northern Spain, and the very specifically limited wine zone of Navarra—today one of Spain’s most exciting quality wine regions.

The Navarra wine region lies between Rioja and the French border to the northeast. The foothills of the Pyrenees descend towards Navarra from the north and the Ebro River runs up from the south into Rioja to the west. Navarra’s capital, Pamplona, lies just north of the wine region. With its special location between Rioja and Bordeaux, it draws expertise and inspiration from both of these regions while retaining its own individual wine style.

Adding to the interest factor our in-store wine notes informed me that; Vines grown in the Navarra region of Spain are trained along trellises rather than in bushes, maximizing their exposure to the sun and resulting in grapes of intense flavor. A sight to behold I am sure and one I’d like to see in person someday.

Produced and bottled by Bodegas Pagos de Araiz this 2012 red wine blend is made up of 81% Tempranillo, 9% Garnacha, 8% Merlot and 2% Cabernet Sauvignon. In my case the luck of the blends has struck again. Deliciously fruity and well-balanced this red fruit forward wine falls into my category of “easy drinker”.  A great every day accompaniment to meals with meats, pasta, pizza, Spanish foods etc.

I was not planning on writing a Tempranillo Day post but the stars must have aligned and fate stepped in to bring this wine to me with such good timing.  And I’ve saved the best for last. The Tablao is presently priced at $7.99. Yes, a perfectly priced every day wine. I am now looking forward to stretching out this International Tempranillo Day through the weekend.  ¡SALUD!

From Wine Enthusiasts “Five Things You Didn’t Know About Tempranillo”:

1. It’s very, very old. Tempranillo is indigenous to Spain and dates back to before the time of Christ. It’s been grown on the Iberian Peninsula since the Phoenicians settled it in 1100 B.C.

2. It’s an early bird. Tempranillo is derived from the word temprano, which in Spanish means “early.” Among red varieties in Spain, it’s considered an early ripener.

3. It has many monikers. Tempranillo goes by more than a dozen different names around the world, depending on where it’s cultivated. It’s called Tinto Fino in Ribera del Duero, Tinta de Toro in Toro, Ull de Llebre in Catalonia, Cencibel in La Mancha and Tinto Roriz in Portugal.

4. It’s cloned. There are about 500 clones of Tempranillo in Spain alone; Tinto Fino and Tinta de Toro are the best-known.

5. It has a white mutant. Although rare, albino Tempranillo does exist in Rioja. It’s an approved wine grape; it yields a citrusy, rather simple wine akin to Viognier in weight, flavor and overall style. 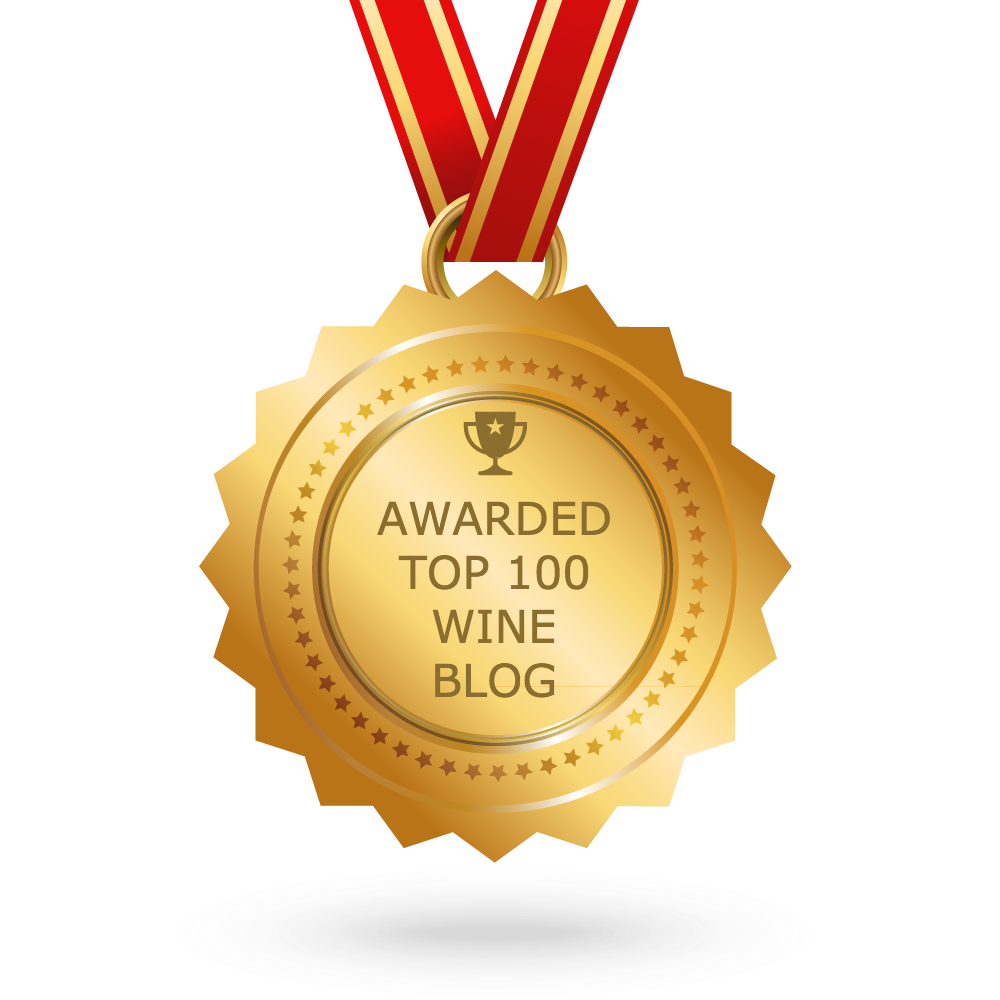